Zcash is a cryptocurrency and blockchain that offers strong privacy.

Zcash was launched by the Electric Coin Company (formally, the Zerocoin Electric Coin Company, LLC) in October, 2016. Zcash is a fork of Bitcoin and runs on the Zerocash protocol, which was first described in a white paper published in 2014 and subsequently developed over the course of several years by Zooko Wilcox-O'Hearn and various professors and academic researchers from MIT, Johns Hopkins University, the Technion, and Tel Aviv University. Initial research on the Zerocash protocol was funded in part by DARPA, the U.S. Air Force Research Laboratory, and the Office of Naval Research.

Zcash (ZEC), or ZEC coin, is the digital asset token of the Zcash Network (similar to how bitcoin or BTC is the digital asset token of the Bitcoin network). All ZEC balances and transactions are recorded on the Zcash blockchain. The smallest subunit of ZEC is the “zatoshi,” which is 10-8 ZEC or one hundred-millionth of a ZEC (0.00000001 ZEC). Zcash can be bought and sold for fiat currency or other digital currencies.

Zcash can be bought and sold for fiat currency, e.g. ZEC to USD and vice versa, or other digital currencies. Zcash can be purchased on a cryptocurrency exchange and stored in a Zcash wallet, or in a crypto wallet with a regulated exchange and custodian like Gemini.

If bitcoin resembles “digital gold” (i.e., a store of value), then Zcash is akin to “digital cash,” which offers privacy features similar to those afforded by credit card and debit card transactions, ACH and wire transfers in the U.S. banking system, and international wire transfers on the SWIFT network.

Zcash’s unique value proposition stems from the fact that its encryption technology, known as zero-knowledge proofs or specifically zk-SNARKs (zero-knowledge succinct non-interactive arguments of knowledge), permits users to keep the details of their financial transactions confidential and out of the public eye, while at the same time providing transparency to regulators and financial intermediaries who custody and support the trading of Zcash. 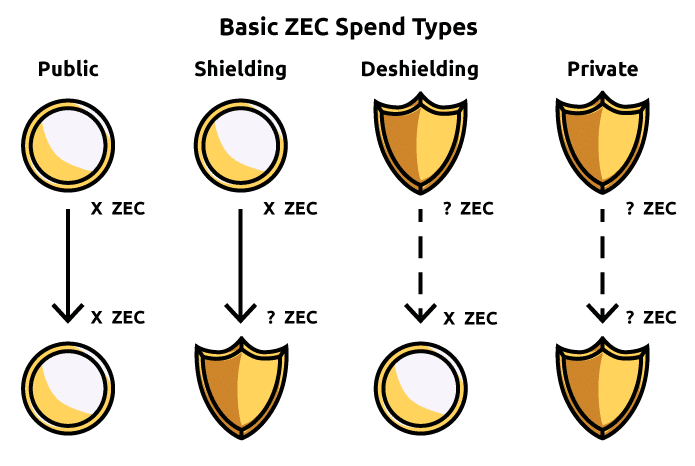 Learn more about Zcash on Cryptopedia:

The pricing data and asset description above are for general informational purposes only and are not investment advice. Buying, selling, and trading cryptocurrency involves risks. You should consult with your own appropriately qualified and licensed advisors before engaging in any transaction on Gemini. Some data is provided by Messari, a third party that is not affiliated with Gemini.